HomeShopBlack HistoryIn Secret Service of the Sacred Heart: The...

This book covers the good deeds of Julia Greeley. Born into slavery, poor, partially blind, and the object of racism, Julia was alone and lived the Gospel of Jesus Christ. Her spiritual life was powerful, and she had many admirable qualities that people respected her for.

Father Blaine Burkey has gathered information and provided us with the insight of Julia Greenley’s life, a powerful and deep collection.

Read more about Julia Greeley below 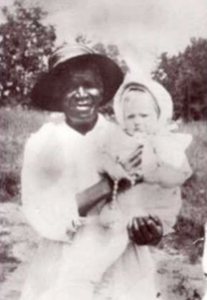 Julia Greeley was born into slavery in Hannibal, Missouri. But her cause for sainthood was opened on Sunday in Denver, where her life of devotion and service continues to inspire.

“She’s a model for me,” said Mary Leisring of the Julia Greeley Guild.

“We’re all called to be saints, and it just goes to show that an ordinary person can become extraordinary. For some of us, she’s already a saint,” said Leisring, who directs Black Catholic ministry in the Denver archdiocese.

Archbishop Samuel J. Aquila of Denver opened Greeley’s cause for canonization on Dec. 18 at an early morning Sunday Mass at the Cathedral Basilica of the Immaculate Conception.

The U.S. bishops heard the case for her canonization from Archbishop Aquila in November at the U.S. Conference of Catholic Bishops’ annual assembly.

Then the bishops unanimously voted to allow the archdiocese to investigate her life and her virtues, marking the beginning of the initial phase of a possible canonization.
Greeley bore slavery’s wounds on her body. One time as a slave master beat her mother, the whip caught her right eye and destroyed it.

She was freed in the 1860s when slavery was abolished.

Around 1880, she traveled to Denver and served as a housekeeper for Colorado’s first territorial governor William Gilpin and his wife Julia.

Greeley converted to Catholicism at Denver’s Sacred Heart Parish. She became devoted to the Sacred Heart of Jesus and to the Eucharist. She joined the Secular Franciscan Order in 1901 and helped spread the Sacred Heart devotion to Denver’s firefighters, among many others.

Despite her meager income, she was famous for aiding her neighbors in Denver’s Five Points neighborhood.

Wearing a floppy hat, oversized shoes, and dabbing her bad eye with a handkerchief, Greeley was regularly seen pulling her red wagon of goods to deliver to the poor and homeless of the city. She often did this at night to avoid embarrassing the people in need of assistance.

She died June 7, 1918, the Feast of the Sacred Heart. A constant stream of people paid their last respects to her.

Because she was born in slavery, her exact age was never known. She was estimated to be 80 years old.

When the first phase of the investigation into her possible sainthood concludes, the archdiocese’s investigators will send a report to the Vatican. The Pontifical Congregation for the Causes of Saints will decide then whether to continue the process.

There are no reviews yet.

Be the first to review “In Secret Service of the Sacred Heart: The Life and Virtues of Julia Greeley” Cancel reply

Thea Bowman: In My Own Words