On the way to Sainthood

There are five black American Catholic candidates for sainthood. For all American Catholics they are models of holiness and service. Let us continue to pray for them. Click below to view prayer.
i. Mother Henriette Delille
ii. Julia Greeley
iii. Mother Mary Lange
iv. Father Augustus Tolton
v. Pierre Toussaint 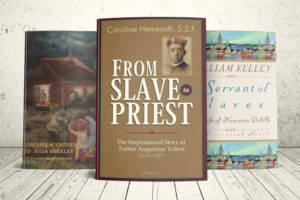 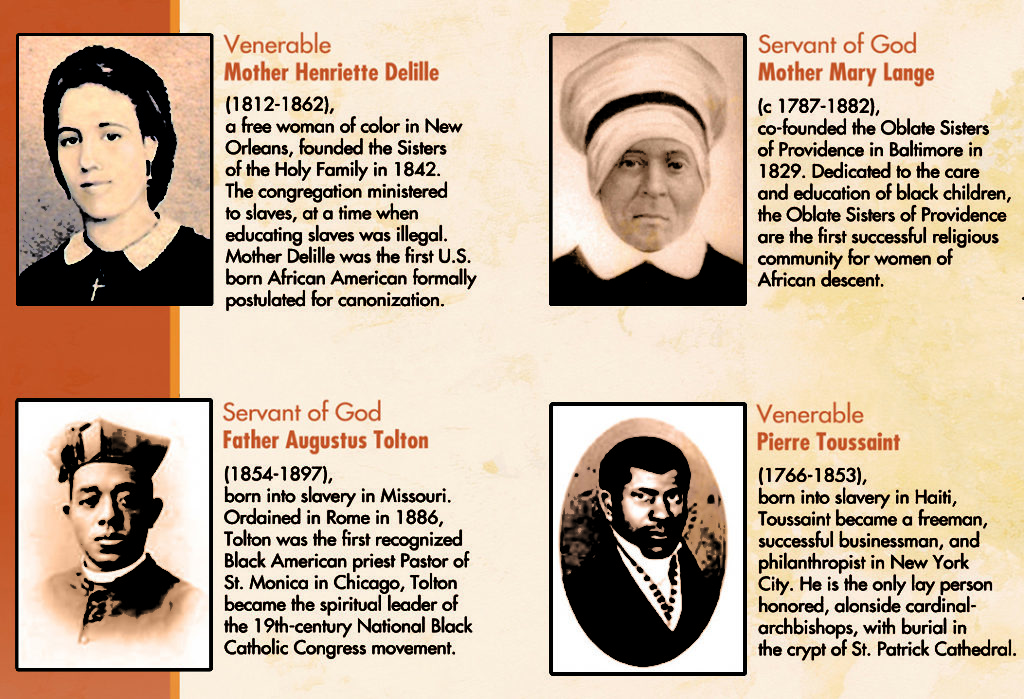 What are the steps to canonization?

The Catholic Church teaches that there are 4 steps to becoming a Saint. Before a person can be considered for sainthood, he/she must have been dead for at least 5 years. (Pope John Paul II waived this requirement in Mother Teresa’s case.)

First Step: “Servant of God”
When the subject arises that a person should be considered for Sainthood, a Bishop is placed in charge of the initial investigation of the person’s life. If it is determined that the candidate is deemed worthy of further consideration, the Vatican grants a “Nihil Obstat.” This is a Latin phrase that means “nothing hinders.” Henceforth, the candidate is called a “Servant of God.”

Second Step: “Venerable”
The Church Official, a Postulator, who coordinates the process and serves as an advocate, must prove that the candidate lived heroic virtues. This is achieved through the collection of documents and testimonies that are collected and presented to the Congregation for the Causes of Saints in Rome. When a candidate is approved, he/she earns the title of “Venerable.”

Third Step: “Blessed”
To be beatified and recognized as a “Blessed,” one miracle acquired through the candidate’s intercession is required in addition to recognition of heroic virtue (or martyrdom in the case of a martyr).

Fourth Step: “Saint”
Canonization requires a second miracle after beatification, though a Pope may waive these requirements. (A miracle is not required prior to a martyr’s beatification, but one is required before his/her canonization.) Once this second miracle has been received through the candidate’s intercession, the Pope declares the person a “Saint.”

Most of the saints whom we refer to as saints, (for instance, St. Josephine Bakhita) have gone through this process of canonization. Others, such as St. Peter and St. Paul, received the title through acclamation, or the universal recognition of their holiness.

Catholics believe that both types of saints (canonized and acclaimed) are already in Heaven, which is why one of the requirements for the canonization process is proof of miracles performed by the possible saint after his death. Canonized saints can be venerated anywhere and prayed to publicly, and their lives are held up to Christians still struggling here on earth as examples to be imitated.

Very early on, however, the meaning of the word began to change. As Christianity began to spread, it became clear that some Christians lived lives of extraordinary, or heroic, virtue. While other Christians struggled to live out the gospel of Christ, these people were eminent examples of the moral virtues, and they easily practiced the theological virtues of faith, hope, and charity.
The word “saint” thus became more narrowly applied to such people, who were venerated after their deaths as saints, usually by the members of their local church or the Christians in the region where they lived, because they were familiar with their good deeds. Eventually, the Catholic Church created a process, called “canonization,” through which such venerable people could be recognized as saints by all Christians everywhere.