During Black History Month we will focus on our heritage as Josephites and our history. 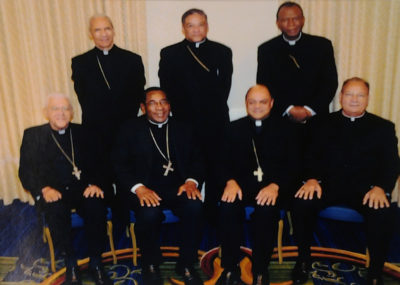 The Josephites are re-opening their House of Formation for priests in Nigeria.

He said members of the Nigerian community were “delighted to see me back because now they knew it is true that the Josephite house will be re-opened. The people there welcomed me back.”

Re-opening the vocation campus in Nigeria has been a priority for the Josephites. Plans to go back to Nigeria, after they were halted about seven years ago, were announced shortly after the selection of the new Josephite leadership team last June.

In recent years, the Josephites have ordained 20 new priests, all of whom are from the African vocation program.

History of The Society of St. Joseph of the Sacred Heart

The Society of St. Joseph of the Sacred Heart, The Josephites, a religious community of Catholic Priests and Brothers, is committed to serving the African American community through the proclamation of the Gospel and our personal witness. Our commitment is expressed through sacramental, educational and pastoral ministry, service to those in need, and working for social justice. We are an interracial, intercultural community of priests and brothers who work to advance the teachings of the Church in the African American community.

The Sulpician Fathers arrived in Baltimore in early 1790. Shortly after their arrival, a large number of African American Catholic refugees arrived in Baltimore. On July 10, 1793, six French ships that had sailed from Cape Francois, arrived at Fells Point with approximately 500 Haitians, slaves and free. Whether slave or free, these refugees were Catholics and spoke French fluently. Therefore, on February 21, 1964 St. Francis Xavier Catholic Church in East Baltimore was purchased, making it the first Catholic Church in the United States officially established for African American.

Since slavery was the established order of the time, the only education that many Blacks received was from the Church. A school was started and the Oblate Sisters of Providence were the teachers.

In 1871, the Mill Hill Fathers (Josephites of England) were assigned to St. Francis Xavier Catholic Church in Baltimore, Maryland. A home for the aged poor was started and an orphanage was operated. A night school opened for adults; an industrial school was held in basement of the Church, and a lending library was located in the priest house. In 1893, the Mill Hill Fathers formed an order named the Society of St. Joseph of the Sacred Heart (Josephites). Father Charles Uncles, a Black priest and a Baltimorean was one of the original members of the Josephites.

Today, the Josephites are active throughout the United States, severing Parishes in Alabama, California, Louisiana, Maryland, Mississippi, Texas, Virginia, and Washington, D.C. This Order of dedicated religious men (Fathers & Brothers) holds great significance for the African–American community inside and outside the Catholic Church. The Josephites were instrumental in incorporating the African American cultural experience into the liturgy of the Catholic Church in the United States. Four Josephites and three laymen founded the Knights and Ladies of Peter Claver in 1909, which today is the largest fraternal organization of African American Catholics.

Over the next few weeks the Josephite Pastoral Center will reintroduce to you some of the accomplishments of our Black Josephites.

Watch a documentary about the Josephites by ordering “Enduring Faith” DVD.